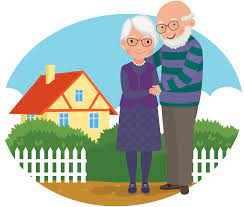 Elder abuse takes many forms. But seniors are especially vulnerable when it comes to financial abuse and scams.

It’s easy to see why: Americans age 70 and above have accumulated a total net worth of nearly $35 trillion, much of it in their homes and other real estate holdings. According to the FBI, seniors are targeted by con artists because they tend to be financially stable and often own their homes outright.

So-called “confidence/romance fraud” is the No. 1 type of fraud perpetrated upon seniors in terms of losses, with email scams coming in second. But losses from crimes involving real estate have been increasing recently, rising from $36 million in 2019 to $50 million last year.

The swindler can be just about anybody: a relative, a supposed new friend, a realty agent, a mortgage lender, an appraiser or investor. That’s why the friends and relatives of any senior entering into a real estate deal should watch for red flags — as should the agents, lenders, title companies and other professionals involved in the transaction.

One of the most popular scams the FBI sees revolves around home equity conversion mortgages, aka reverse mortgages. A legitimate HECM allows eligible owners to extract equity they’ve built in their houses over the years without having to make payments until they leave the property for good. Although there are some proprietary programs available, reverse mortgages are mostly insured by the Federal Housing Administration.

Con artists looks for seniors who are not familiar with the loans’ requirements or the detailed approval process. In some cases, the Oregon FBI reported recently, the scammer will pressure seniors into taking out loans that they don’t need or that are totally inappropriate for their situation.

Another popular real estate ruse uses elders as “straw buyers.” Here, the criminal wants to buy a house, but for some unknown reason, can’t qualify for a mortgage. So they persuade a senior to sign the necessary papers “as a favor.” Or maybe they offer some cash to go along with the deal.

In the end, the bad guy ends up skimming all of the equity out of the property and leaving his victim not only holding a hefty 30-year mortgage, but also with potential criminal liability.

Some years back, Sacramento agent Elizabeth Weintraub learned of a case in which a law firm advised a senior that she could do a loan modification on a second mortgage that was already charged-off through bankruptcy — and then took her money. Weintraub says she was “appalled, not only at the audacity of the lawyer, but that crooks are still running elder abuse scams like this and getting away with it.”

In other real estate-related scams, seniors are offered free houses, investment/refinance opportunities, or ways to get out of a timeshare or avoid foreclosure. But the result is often the same: The senior loses all or part of their nest egg, and their credit history is left in tatters.

So how do you know when a senior in your life may be headed down the wrong road? Here are some telltale signs:

▪ If you can never speak directly to the person the elder is dealing with, your antennae should wiggle. Most con artists hide behind the telephone, email and text messages. Or maybe they claim to live in some far-off country. Either way, they don’t want to be seen so they cannot be identified.

▪ On the flip side, be leery if your senior is not allowed to speak for himself or herself. If the “partner” does all the talking, the senior is probably being taken advantage of.

▪ If your senior cannot explain what they are about to do and why, they should not move ahead. Push them to demonstrate that they fully understand the transaction and its implications.

▪ If they say this newfound pal is a nice person and that they just want to help him out, bring in the authorities, or at least ask a certified housing counselor to look over the details. Criminals always try to gain their targets’ trust, and seniors are often not only trusting, but polite.

▪ Look for documents that support the transaction, if there are any, and run them by a real estate attorney to make sure they are on the up-and-up.

▪ Con artists sometimes use fraudulent powers of attorney. And if the proceeds are disbursed to someone other than your senior, stop the transaction in its tracks.

▪ If the senior is being pressured to act quickly, don’t let them. Scammers often create a sense of urgency, so try to get in the way and slow things down.

▪ Check contact information online — names, phone numbers, addresses — to see if anyone else may have been ripped off by the same scammer. People who have been stiffed often post their stories in hopes of preventing others from going through the same thing.

Meanwhile, realty and allied professionals involved in the deal should take note of any signs of cognitive impairment, confusion or lack of understanding by the senior. And if the senior is accompanied by an overbearing third party with no apparent role in the transaction, the professional should ask the senior to consult with a relative or friend — or even make a call themselves.

Says Weintraub: “We can’t sit on the fence and be part of the problem.”

Lew Sichelman has been covering real estate for more than 50 years. He is a regular contributor to numerous shelter magazines and housing and housing-finance industry publications. Readers can contact him at lsichelman@aol.com.

IRS: New Contracts Awarded to Private Collection Agencies; Taxpayers May Be Contacted by One of Three Groups

How To Draft An Answer To A Collection Lawsuit